Today the children were very lucky to have been visited by members of the victorious Minor and Under 20 Cork Men’s football teams. Representing them were Hugh Murphy (minor), his brother Jack Murphy (u20), Colm O’ Callaghan (u20), and Neil Lordan (minor). The Under 20s footballers are now All Ireland Champions after beating Dublin with a score of 3-16 to 1-14 in O’Moore Park in Early August. The minor footballers beat Galway by six points in Croke Park last weekend to win the Electric Ireland Minor Football Championship Final with the score line showing Cork 3-20 to Galway’s 3-14. 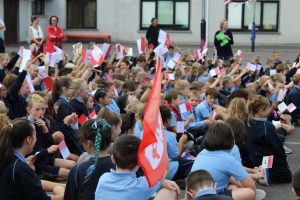 The school and our yard were wonderfully decked out in red and white bunting, flags and posters to welcome the heroic players to Scoil Barra. Following some encouraging words from the players the children listened to Bobbie O’ Dwyer the Cork Minor’s manager who encouraged all of our children to work very hard at whatever it is they love doing in both sporting and academic worlds and to do their best at all times.

Corcaigh Abú , Up The Rebels!! 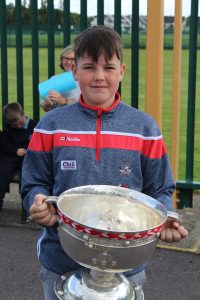 Happy, happy summer holidays! Have a great summer from everyone in Scoil Barra to our whole, extended Scoil Barra community!

Today is the last day of the school year! All of the staff of Scoil Barra would like to thank the pupils and parents for their hard work and commitment this year, especially during this last term. We all hope you have a safe summer break full of fun, sun, family and friends.

Our 6th class yearbooks are published! It's so wonderful to see the pupils' happy memories of their years in Scoil Barra. We are so proud of this group of outstanding pupils. Maith sibh, uilig. https://www.scoilbarra.ie/6th-class-digital-yearbooks-now-published/